The Atlantic surfclam, Spisula solidissima, is a benthic dominant in the shallower waters of the mid Atlantic through Georges Bank region. Surfclams also support a substantial fishery with landings approximating 57 million pounds annually. The moving footprint of the range of exploited surfclams in these regions over the past four decades is now well documented in both North East Fisheries Science Center (NEFSC) stock assessment surveys and the gradual northeasterly movement of harvest activity. This project is developing a 33-year retrospective, spatially explicit time series of growth rates in surfclams collected over the surveyed range to both document the aforementioned moving footprint in terms of population productivity and provide an explicit forward projection of future productivity. Forward projections in the surfclam fishery are particularly challenging given the absence of a stock-recruit relationship and a life history strategy adapted to sedentary life on the rapidly changing continental shelf. These population traits drive observations that may be incorrectly interpreted as overfishing requiring precautionary management (e.g., decline of density in southern section of surveyed range) when the signal is, in fact, driven by warming waters. 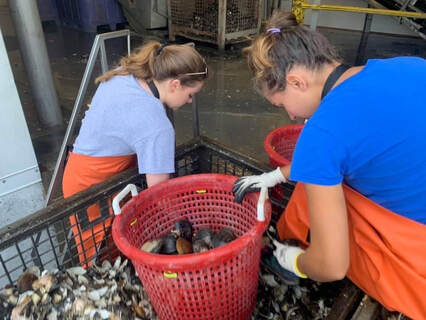